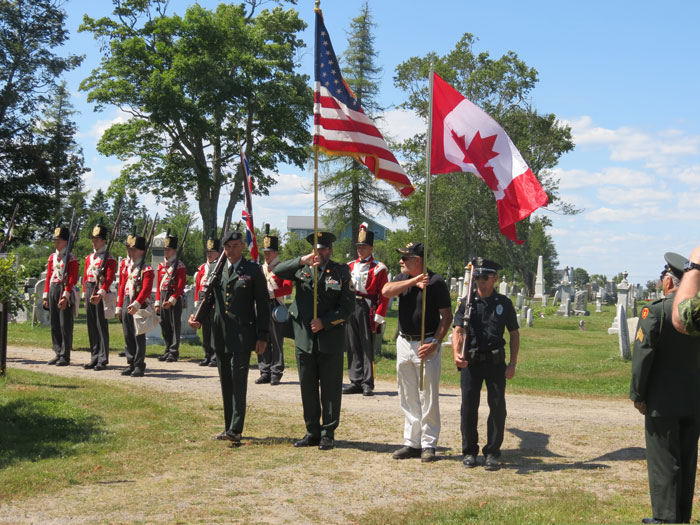 This application is sponsored by the Border Historical Society, Eastport, Maine.

Walter St. John was commissioned as an Ensign in the 64th Regiment of Foot on 24 December 1804.  The regiment was serving in Barbados.  When the 64th was transferred to Surinam in mid-1805, St. John remained in Barbados and joined the 46th (South Devonshire) Regiment of Foot that was part of the garrison there.  He was promoted to Captain in 1806.  The 46th participated in the capture of the French islands of Martinique in 1809 and Guadeloupe in 1810.  St. John most likely participated in these attacks.  The 46th returned to England in late 1811.  Following garrison duty there, the 46th was ordered to Australia in August 1813.  St. John again changed regiments and joined the 102nd Regiment of Foot in July 1813. 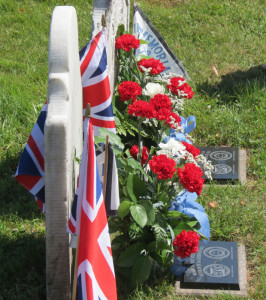 The 102nd had an unusual history.  It was raised in England in 1789 as the New South Wales Corps and was sent to garrison Australia.  While there, it did not have a good reputation.  It is best known for the “Rum Rebellion” of 1808.  The officers of the regiment had been benefiting from the illegal trade in rum.  When the Governor, William Bligh of Bounty fame, tried to suppress this, they deposed him as governor.  This is referred to as “Bligh’s second mutiny.”  As a consequence, the New South Wales Corps was renamed the 102nd Regiment of Foot and was returned to England.  It sailed via Cape Horn thus becoming the first British regiment to circumnavigate the globe!  The regiment was reconstituted and sorted out while in England.  In June 1812, it was ordered to Bermuda where St. John joined it on 11 November 1813.  It appears that he took a reduction in rank to Lieutenant in order to make the transfer. 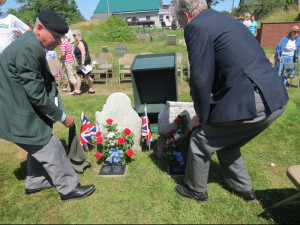 The British were gaining naval superiority over the Americans and began blockading and raiding the Atlantic seaboard.  The 102nd was part of a force, led by Admiral George Cockburn and General sir Sidney Beckwith, which attacked locations in Virginian and North Carolina in June 1813.  Following the defeat of Napoleon in April 1814, the British could turn their attention to the war in North America.  Besides tightening the blockade, the British planned a series of major offensives in 1814.  One of these was to capture what is now Northern Maine.  The goals were to stop American privateers using ports in the area as bases and to provide security to the vital Grand Communications Route that ran up the St. John River Valley in New Brunswick.  The first objective would be Fort Sullivan on Moose Island (Eastport, Maine).

The attack fleet assembled at Shelburne, Nova Scotia under the command of Captain Sir Thomas Hardy.  The land forces consisted of detachments of Royal Artillery and Royal Engineers in addition to the 102nd Regiment.  The fleet left Shelburne on 23 June and arrived at Eastport in the afternoon of 11 July 1814.  The American garrison, led by Major Perley Putnam of the 40th Regiment, United States Army, realized that they were outnumbered and quickly surrendered.  Lieutenant St. John was not part of this attack as he arrived three days later.  It appears that he was unwell at the time and likely remained so.  He served in Eastport, spent a month as part of the garrison at nearby St. Andrews, New Brunswick, and returned to Eastport.  He was there when he died on 28 May 1815.  During the four years that Eastport was occupied, he was the only officer of the 102nd who died there.

Lieutenant St. John was buried in the English corner of the “old” town cemetery.  It was near the water and, by the 1820s, erosion was starting to expose the graves.  The town opened a new cemetery, now called Hillside East, and many bodies were transferred from the old to the new cemetery.  However, St. John remained in place until 1854.  The local Masonic Lodge Eastern No. 7 discovered that he had been a mason and so moved him to the new cemetery.  His headstone reads:

Meanwhile, the British completed the conquest of Northern Maine by capturing the towns along the Penobscott River and Machias in September 1814.  Maine, north of the Penobscot River, was declared to be British Territory.  This did not last for long as the territory was returned to the United States under the terms of the Treaty of Ghent that ended the War of 1812.  British troops left all parts of Maine, except for Eastport, on 25 April 1815.  Eastport was not evacuated until 30 June 1818.  As part of the general reduction in forces, the 102nd Regiment was renumbered to the 100th Regiment in 1816 and then returned to England where it was disbanded in 1818.