David Tice Bastedo is the son of Jacob Bastedo UE and Clarissa Jean Van Slyke.  David was born on 12 Mar 1769 near Schenectady, NY.  During the American Revolution and while still a teenager David joined his uncle, Capt Gilbert Tice, at Fort Niagara and later Newark where he served as a scout with Butler’s Rangers during the last year of the war.

Following the war he married Elizabeth McMicking, daughter of Peter McMicking UE and settled at Stamford, Ont.   David joined the 2nd Regiment Lincoln Militia and served as an Ensign until his promotion to Lt by Pres Andrew Grant in May of 1806.

David was again promoted to Captain a month after the start of the War of 1812 and assigned to a Flank Company during the war.  David served in that capacity until he resigned his commission in October, 1814.

Following the end of the War of 1812, David and Elizabeth sold their land holdings at Stamford and by the early 1820’s had relocated to Flamborough East where they lived out their remaining years.  David died in 1834 and is buried at Waterdown Union Cemetery, Waterdown, ON  along with his wife.

He is listed also on Page 136 of the List as being the Uncle of David Bastedo. They came to Canada together in 1783-84. David was only 14 years old at the time.

Peter McMicking knew David even in his youth. Peter was a fellow officer in Butler’s Rangers with David’s Uncle Gilbert Tice during the war. 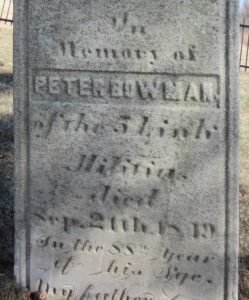 He was a Private in Butler’s Rangers from Susquehanna River. Enlisted at the age of 15 at Niagara July 1784. Took the oath of allegiance at Niagara sometime between Nov 1784 and Jun 1785. Listed as a settler “at the Mountain and near Fort Erie, 1785”. Land entitlement in the District of Nassau in 1792 totalled 350 acres. Captain in the 4th Regiment of the Lincoln Militia in 1811. Settled in Ancaster Township, Upper Canada. Died 28 Oct 1847 at the residence of his only surviving child, Mrs. P. Spohn, in Ancaster in An Annotated Nominal Roll of Butler’s Rangers 1777 – 1784, pg 50.

END_OF_DOCUMENT_TOKEN_TO_BE_REPLACED 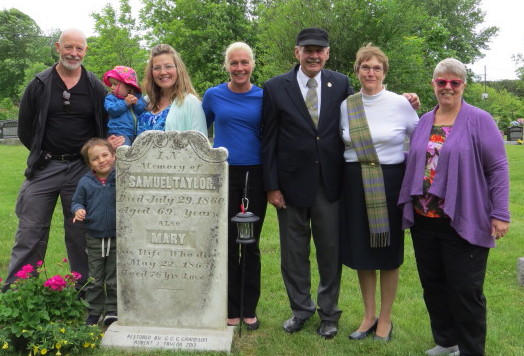 END_OF_DOCUMENT_TOKEN_TO_BE_REPLACED

In 1812 Zachariah Hainer joined the 1st Regiment Lincoln Militia.  At age fifty-one, he was a seasoned soldier, a veteran of the American Revolution, one of Butler’s Rangers.  His second military experience, in the War of 1812, was much shorter than his first fight.  On 24 Oct 1812, Zachariah Hainer was “declared unfit for service” and entered on the Pension  List.  By December he was very ill.  On 2 Feb 1813,  Zachariah Hainer died of disease.

Zachariah Hainer was born on 22 Jul 1761 in Rhinebeck, New York at Livingstone Manor.  The Hainer (or Haner or Heiner or Hoener) family had been living here ever since they left the Palatine area of Germany in 1710.  Zachariah was a third generation North  American.  When some of the American colonists rebelled against Britain, he remained loyal.  At age nineteen, he was one of Butler’s Rangers, serving in Captain O’Hare’s Company as a sergeant.

When the Revolution ended, Zachariah emigrated to the Niagara Peninsula, as did so many of Butler’s Rangers.  As a reward for his loyal service, he was granted , in 1796, three hundred acres of land in Wainfleet Township, parts of Lot 6 & 7 Conc 6 & 7 (UCLP H1/18).  He did not settle on his Wainfleet property.  He chose instead to live in Grantham,  now part of St. Catharines.

On 19 Mar 1796 or 1797 (accounts vary) Zachariah married Sophia, neé Brown or Braun, widow of Jacob Lutz.  She had a daughter, Magdalena, from her first marriage.  It may have been a second marriage for Zachariah as well.  Together Zachariah and Sophia had these children:

When war was declared in June of 1812, Zachariah’s youngest child was not yet two years old.  After his death, Zachariah’s widow Sophia made a claim for losses suffered during the War “taken month December 1813 during War — oats, hay, blankets and nails.” (NAC MfmT1128)

The burial place of Zachariah Hainer is unknown.  He probably lies somewhere in Grantham Township where he lived.  Years later his widow moved to Esquesing Township where she died in 1845 and is buried in Limehouse Cemetery.  Although it is very unlikely that he is buried with her,  her headstone remembers him in the wording,

Walter Dittrick was born on the 31 May 1793 on the family farmstead, 12 Mile Creek St. Catharines, Upper Canada as recorded in the family bible (St. Catharines Public Library, Special Collections). He was the fourth son of Sergeant Jacob Dittrick, former Butler’s Ranger, and Margaret Pickard. She was the daughter of William Pickard who along with two of his sons were also members of Captain Bernard Frey’s Company of Butler’s Rangers.

END_OF_DOCUMENT_TOKEN_TO_BE_REPLACED

Captain James Dittrick, commanded the Flank Company in Colonel Robert Nellis’s 4th Regiment Lincoln Militia. Of all five brothers who served in the flank companies of the Lincoln Militia during the War, James’s career is the most thoroughly documented. His “Reminisces of the early years of settlement in Niagara and St. Catharines” was published in the “Loyalist Narratives” compiled by British author George Coventry in 1860 and reprinted many times since; most recently by the Champlain Society. He was also interviewed by Benson Lossing who reported this meeting in the Pictorial Field Book of the War of 1812 published in 1869. Being a contemporary, and neighbour of William Hamilton Merritt, he is mentioned several times (often competitively) in the Biography of the Honouable William Hamilton Merritt, authored by Merritt’s younger son. James is also recorded in the ”Merritt Papers” preserved by the Archives of Ontario.

END_OF_DOCUMENT_TOKEN_TO_BE_REPLACED

Jacob Dittrick was born on the 12 Mile Creek at the family’s farmstead on the 12 Feb 1791 in St. Catharines. He was the son of Sergeant Jacob Dittrick of Captain Walter Butler’s Company (and later Captain Peter Hare’s Company) Butlers Rangers. Before the Revolutionary War Jacob senior was a Ranger in John Butler’s Colonial Indian Department, living along the Mohawk River in New York where their farm of several generations was located. Writing in the Loyalist Reminisces published in 1861 brother James reported the farm was situated 30 miles east of Utica New York.

END_OF_DOCUMENT_TOKEN_TO_BE_REPLACED

William Wintermute, (1795-1871) was born in Bertie Township, Ontario  and served in the Niagara Light Dragoons during the War of 1812. His father, Peter Wintermute, was a corporal in Mckinnon’s Company, Butler’s Rangers. The Wintermutes made a hasty retreat to Canada with Colonel John Butler after the Wyoming Massacre which was fought in front of their stockade (Fort Wintermoot) in July, 1779. The Union flag which flew over their fort on that fateful day (225 rebels were killed with only slight Ranger losses) was brought back to Niagara and eventually stored in the Butler residence in Newark.

END_OF_DOCUMENT_TOKEN_TO_BE_REPLACED 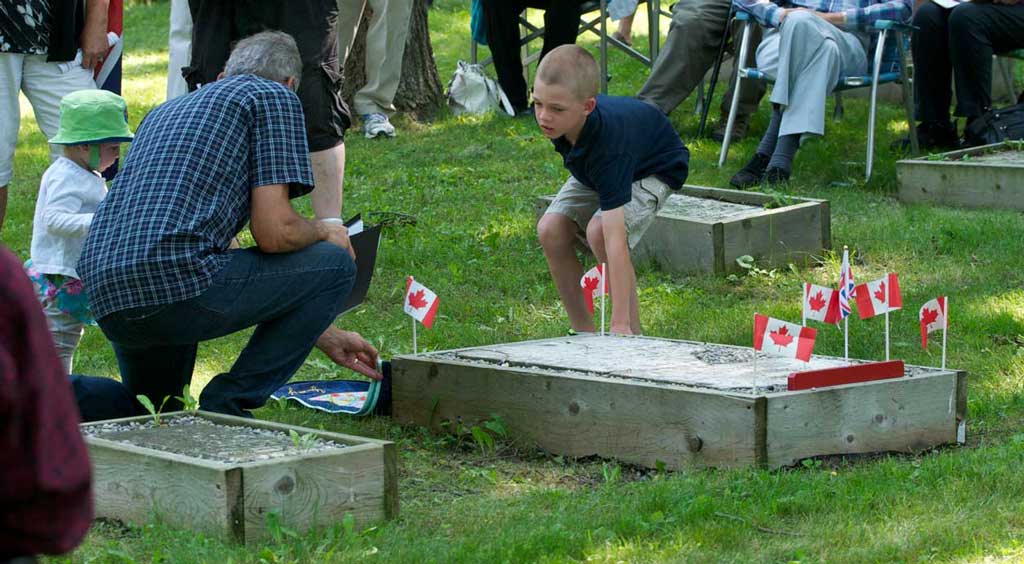