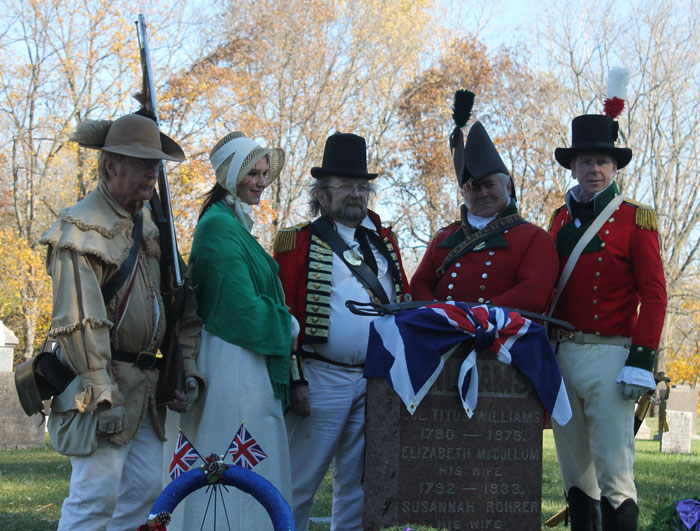 After the war was appointed Major and then Colonel and retired many years after. He was 86 years of age in 1877. Lord Elgin sent him the following letter:

“I have much pleasure in availing myself of the opportunity of expressing to Colonel Titus Williams the high sense I entertain of his services and he is hereby permitted to retire retaining his rank.”

Lieutenant Titus Williams of the 2nd Norfolk, a son of the veteran Captain Jonathan Williams of Woodhouse, has been mentioned as one of those who was of Brock’s forces at Detroit in 1812. He accompanied Hull’s army, after they became prisoners of war, from Detroit to Fort George. He subsequently served with distinction on the Grand River and Niagara frontier and surprised and took as prisoners thirty Americans under Captain King between Fort Erie and Chippewa, but on June 17th 1813, when endeavouring to secure some buried arms and ammunitions at Sugar Loaf Hill, he with nine privates fell into the hands of the enemy. He suffered many vicissitudes while a prisoner on the other side of the line. He is said to have resented the treatment of himself and other prisoners by seizing an axe and chopping down a Liberty pole, which did not increase his chances of liberty, which nevertheless he subsequently regained, though not before he and other prisoners had been threatened with death to the hands of the American in reprisal for an alleged grievance of theirs against the British. Williams subsequently served as adjutant at Turkey Point and rose to the rank of lieutenant colonel.

Captain Williams was liberated on May 18, 1814 and arrived home on July 5. He was appointed Adjutant of the 4th Regiment Norfolk Militia and remained with them until after the Battle of Lundy’s Lane. He was next promoted to a commanding position in the forces of the regular stationed at Norfolk. When his regiment was ordered home he was offered a position of Col. which he declined. During the remaining months of the war he held a position with the Norfolk militia as a Major and afterward became Col until incapacitated by the infirmities of old age.”

In 1875 the Canadian Parliament voted to distribute the sum of $50,000 in $20 increments to all Canadian militia veterans from the War of 1812 who were still alive and residing in Canada.

Col Titus Williams was married twice and settled on Lot 18 on the Walsingham lake shore. He had 16 children.